Tim Barkham (c77-82) is a doctor and has lived in Singapore for nearly 20 years.

Can you tell us about your background?

I was born in Uganda. I went to a prep school near Bury St Edmunds, Suffolk, aged 8yrs, before going to Felsted with my siblings, Simon, Caroline, and Justin. Home was in Suffolk, and then Nigeria, Saudi Arabia, Yemen, and finally in Islington, London. I took a year off, initially working in restaurants to pay for my driving lessons, then for DHL in Riyadh. I studied Medicine at St Thomas' in London. After my first year working, in Brighton and London, I took another six months off, windsurfing and revamping my MGB-GT. Then it was back to work in London, until I moved to Singapore in 1999 with my wife Jackie, for a three-year job which has extended to 19 years so far! Our children are; Harrison 20yrs, Sophia 18, and George 15.

How did a boarding school education help you?

I actually enjoyed working, and still am! Was this nature, or nurture influenced by Felsted? I don’t know. Being a boarder seemed perfect: no commuting, and no shortage of people to play games with, although I always felt awful, almost nauseous, being driven to school at the beginning of term. I played enormous amounts of sports, was in the 1st team for rugby and hockey, and was the Fives school champion. I was also a swimmer, with a number of school records. I think the variety and fun we had at school must have contributed to me playing sports all these years.

Where do you work now?

I’m specialised in infection. I work at Tan Tock Seng Hospital, Singapore. I also teach at The National University of Singapore. The clinical side provides non-stop interest; you never know what infection will come knocking! I find myself asking questions and looking things up every day. I've worked with super research collaborators, and have created diagnostic tests that have been commercialised.

Do you speak any other languages?

I speak a little French, though this is unconnected with life in Singapore. I meet many expats from other countries who speak English fluently as a second language. I used to think I was lucky to have it as a first language but these other people have at least two languages, as they have their own and English.

What is your favourite memory of Felsted?

Inter-house sporting rivalry was intense. We won the swimming champs my first year, despite one lad dislocating his shoulder during the 20-person relay, and completing his length with one arm! I remember a house hockey match when someone strengthened his hockey stick with fibreglass, so it was much thicker than normal. He could whack the ball the whole length of the pitch, at head height. It was dangerous but super fun. The referee, a master, didn't realise! I still play hockey for a club called The Tornados, which I started with friends in Singapore back in 2003.

Do you have time for any other hobbies?

You have to! Apart from playing hockey, I started a rugby club, Tanglin Rugby Club, with some friends. I coached rugby for around eleven years, giving up two years ago. My mission statement was 'Smiles on faces and cups in the cupboard'; I think we did a pretty good job, with memorable tours to Malaysia and Hong Kong. Our daughter is playing for the Singapore U20s in the world ‘Touch’ championship this August. I’ve now moved on to golf and recently broke 90; once! Looking ahead, I’m lucky as I meet up with all my siblings whenever I pass through London, so although I’m not sure when we will leave Singapore, or where we will go, London seems attractive. Our children might also go globe-trotting, so I plan to work part-time in retirement while travelling around the world to wherever they are, and to keep playing sports for as long as possible. 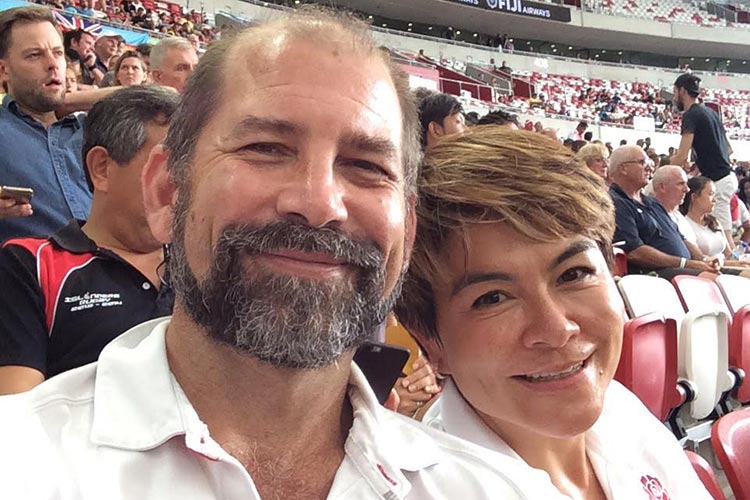