Aimée Schilder and Tabitha Fox, Year 8 pupils at Felsted Preparatory School, have been crowned the National Junior Winners of the UK Young Scientists Competition at The Big Bang Fair 2017.

The competition aims to recognise and reward young people’s achievements in science, technology, engineering and maths (STEM) by encouraging entrants to submit their own research-based investigative project. Aimée and Tabitha won their Regional Heat at the Big Bang Eastern Fair with their project, “Spicing up a Spacesuit”, as well as picking up the Junior Chemistry Prize 2016 and a BA Crest Bronze Award. The aim of their project was to understand more about the NASA extravehicular mobility unit (EMU) spacesuit and to create their own tests to improve its design, comfort and functionality. 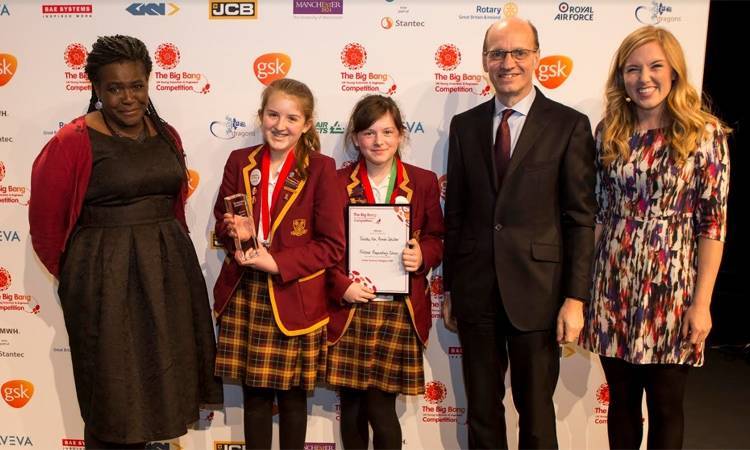 Following their regional win, the Felsted girls wrote to a number of Universities, agencies and companies, requesting guidance on how to take their project forward for the National finals. They received many positive, highly-personalised responses and offers of support, in particular, from the University of Essex, the National Space Academy and the UK Space Agency. They also attended the “Science in Space with Tim Peake and Tim Kopra” event at The Royal Albert Hall for further inspiration, and were invited by the University of Essex to showcase their project at its science-themed Big Bang Marketplace event in December 2016 at their Colchester campus.

At the National Finals in Birmingham, they presented their investigations and findings to a panel of expert judges, impressing them with the experimental design and their thorough investigation. After three days of intensive work and presenting, the entrants attended an Awards Ceremony, where Aimée and Tabitha were thrilled to be announced as overall Junior Science Winners out of 200 finalists.