Felsted School was founded in 1564, as a Grammar School by Richard Lord Riche who lived at Leez Priory. Lord Riche was by then an old man, approaching seventy, but at the peak of his career he had been Lord Chancellor under King Edward VI. Lord Riche endowed the foundation with land in Essex, a farm on Moreton, the rectories of Matching, Braintree and Broomfield, as well as land in Felsted itself.

When Lord Riche died in 1567, his burial in Felsted Church was organised by three Heralds and attended by 100 Knights and Gentlemen as well as 300 Yeomen on horseback, all dressed in black. Originally the school was housed in the centre of the village of Felsted in a converted Guild Hall with shops on the ground floor. This building is still used by the school today, currently as the Prep School Music Department.

The Riches governed the school till the male line died out in 1673. The last three Schoolmasters they appointed - George Manning (1567-1627), Martin Holbeach (1627-1649) and Christopher Glasscock (1650-1690) - gave Felsted School national fame. Manning refurnished the schoolroom, started the library and left his successor a full school of over a hundred boys. Holbeach, a leading puritan, taught Oliver Cromwell's four sons, as well as the future mathematicians and divines, John Wallis and Isaac Barrow, in addition to Christopher Glasscock, his successor. Glasscock himself sent an average of three boys a year to Cambridge and taught William Byrd of Westover, Virginia. 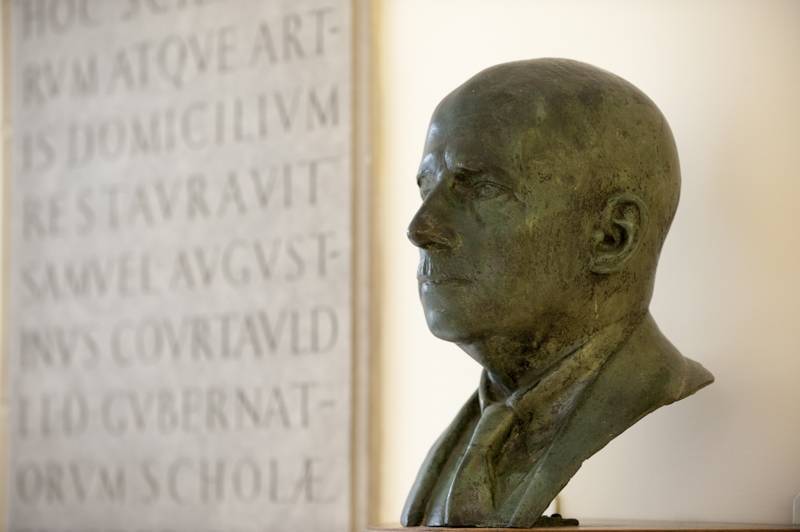 W J Carless (Headmaster from 1794-1813), an Old Etonian, was the first real builder. In 1800 he demolished most of Tudor Ingram's and built the present Georgian house by subscription. This is currently used as the Medical Centre. In 1805 he made the first cricket field. Thirty years later, when Arnold was filling Rugby, Felsted was almost empty; and in the late Forties the school was closed.

The Felsted Charities Act of 7th August 1851 substituted eleven trustees for the hereditary patronage and ordered the building of a new fee-paying school and the sale of the Tudor school. The trustees shrank at first from building: the endowments yielded only £1,400 a year and the fees were low. But with W S Grignon as Headmaster (1856-75) the Victorian school, now Windsor’s, Manor and Mont’s, was gradually built between 1860 and 1867 at a cost of £15,000.

The Tudor school was sold to the Vicar for £70 in 1869. H A Dalton (1890-1906) began the process of expansion by moving the youngest boys in School House to the new Preparatory House in 1894. In between there were two different names; it was “the Junior House” when enlarged in 1935 and “the Junior School” when the Ross Hall was added in 1970 along with much else. For teaching purposes, the school built Chemistry and Physics laboratories in 1899, a two-storey classroom block in 1902, with an Assembly Hall to follow, and parallel Carpentry and Engineering shops in 1904.

All this was a far cry from the age-old classical curriculum, but the Army Class had to be catered for. In 1912 F Stephenson (1906-33) provided the long-awaited Hall, named after WS Grignon, and in 1924 the long line of War Memorial Classrooms and the Library upstairs were added. In 1925 the Old Felstedian Society bought back the original Tudor Schoolroom and gave it to the School and from 1966 it became the Art School.

The first Grignon Hall was burnt down in term-time one night in 1930, but was rapidly replaced in 1931 by the present one. This did yeoman service as the one indoor theatre until it was joined in 1988 by the ‘Hunt’ Studio Theatre made out of the Victorian gymnasium. 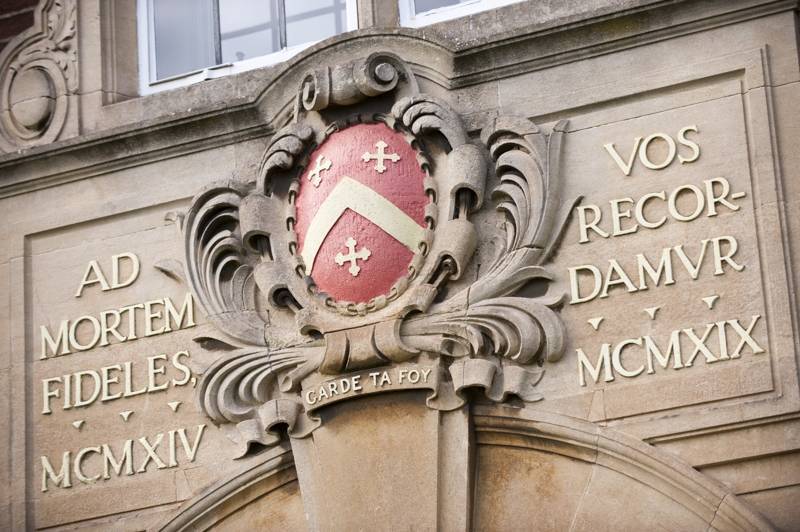 K F J Bickersteth (1933-43) appointed the first Biology master in 1934 and in 1938, S A Courtauld, the Chairman of Governors, gave the new Science Block in which Biology and Zoology flourished as well as Physics and Chemistry. Within this building, aspiring doctors passed their first MB examination while still at school. In 1964, H E Reekie (1951-68) added a new Carpentry, Machine Drawing and Engineering Complex, the first fruits of the Four Hundredth Anniversary Appeal, and A F Eggleston (1968-82) in 1975 had the disused pre-war school laundry converted into a two-storey Craft Centre. In the summer term of 1964, Felstedians past and present celebrated the Four Hundredth Birthday of the school.

There was the traditional Whitsun gathering, but a huge ball was added, and in the last week of term there was an outdoor historical pageant night after night, culminating on 25th July with the visit of HM Queen Elizabeth, The Queen Mother. She attended the service of re-dedication of the School Chapel, toured the Bury and laid the foundation stone of the new Music School before taking tea with the Prefects. 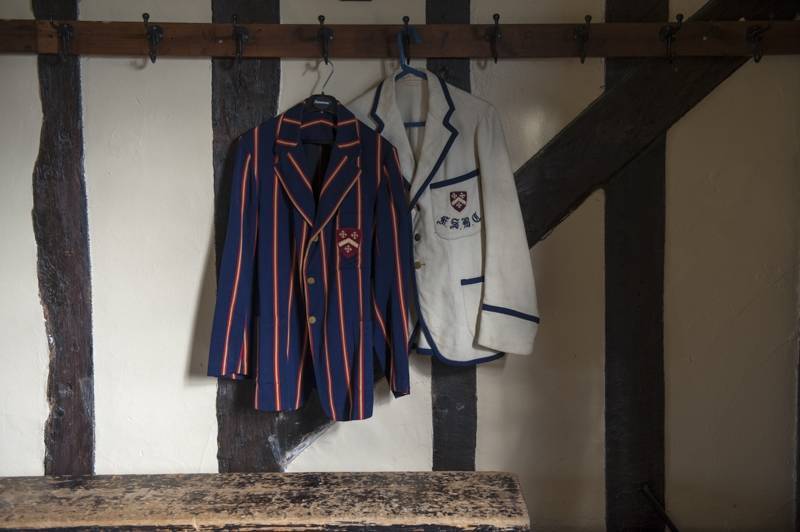 The Chapel had been built in 1873 and the North and South Transepts were added in 1926. In 1962 it was taken out of commission and the school went back to the Parish Church while the Chapel was rebuilt. A wide West end was added with gallery above and choir vestry beyond. The Chancel was widened to include the Bickersteth Memorial Chapel and much else, and its roof was heightened. The interior was completely refurnished and there were many gifts.

The completed Music School was opened in 1965 by Lord Butler of Saffron Walden, who as RA Butler MP had been a Governor of the school since 1929. It contained a Concert Hall ringed round with practice rooms and teaching rooms, all named. The cost of this, and of the Chapel, was met from the Appeal. The Philipps Trust funded the building of a Sports Hall, which was opened in 1978 by Dickie Jeeps, the then Chairman of the Sports Council. A new floor was laid in 1999.

The Old Felstedians generously refurbished the swimming pool in 1983. A new fitness suite was located in one of the original squash courts in 1998. Another Appeal was launched in 1985 by E J H Gould (1983-93), whose projects included the Philipps hockey pitch and a sand-filled artificial surface opened in 1988. The success of the Appeal resulted in the Lord Riche Hall on Prysties; this provided a Common Room and a central dining hall for the whole Senior School, which HRH The Princess Royal opened in May 1989.

In 1993 full co-education started with the conversion of Stocks’s into a girls’ House. Follyfield followed in 1995 and in 2002 an extension to Garnetts was opened making the third full girls’ House. In 1995 an Appeal was launched by S C Roberts (1993-2008) and this raised funds for the Evans Building at the Preparatory School, floodlights on the Philips pitch and the Cromwell Centre. A further extension was built to provide Art and ICT facilities in the expanding Preparatory School and the Courtauld Centre - a building of classrooms, changing rooms and recreational space for years 7 and 8 - opened in 2003.

The Preparatory School had now more than doubled in size in a decade. In 2003 the Development Office opened and the first major project was the building of a second artificial grass hockey pitch, aptly named the Cockett Pitch. In 2007, the House structure was changed to create two day Houses, five boarding Houses (Years 9 – Lower Sixth) and two Upper Sixth Houses.

January 2009 saw the official opening of a new state of the art Music School by Dame Evelyn Glennie. The land on which the previous Music School was sited was sold for development to part fund this project. 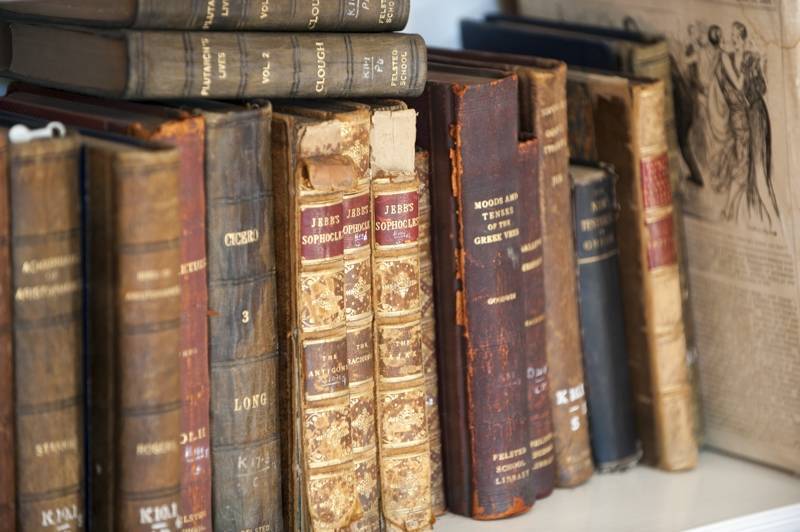 With the arrival of the new Headmaster Dr Michael Walker in September 2008 school numbers were increased from 483 to 520 in September 2010. In the summer of 2009 a new 28 bed boarding annexe was constructed, the Philips Pitch was completely resurfaced and one of the other two Astros resurfaced and relined; the cricket wicket on The Front was relaid; the Medical Centre was newly sited in Ingrams and an Administrative Centre was created in School House next to Stephensons, the Headmaster’s House.

The School embarked on a challenging vision to become the outstanding school of its type (co-educational, independent, boarding and day) in the region and nationally, with a number of new appointments made to the staff and new roles created.

The School also has sought to develop sustained partnerships internationally with a number of partner schools including Louisenlund in Germany, the Magic Bus Charity in Mumbai, India, and Global membership of the Round Square organisation, a worldwide family of schools based on the concept that students’ qualities are drawn out through challenge.

In 2013 Felsted was judged to be ‘excellent’ in all fourteen areas of an Integrated Inspection Report by the Independent Schools Inspectorate, including academic achievement, teaching, governance, co-curriculum, attitudes to learning and quality of boarding. This was a judgement against an overall standard for independent schools and a statement of where Felsted stands in comparison to others.

Felsted celebrated its 450th anniversary in 2014, one of only a handful of schools in the country who can claim this historic milestone. A wide variety of celebratory events were held to mark the wonderful occasion. The celebrations got off to a majestic start in March 2014, as the entire school community (Prep & Senior) descended upon St Paul’s Cathedral in London. The service also saw a number of VIPs in attendance, such as the High Sheriff of Essex, Julia Able-Smith, and Robert Finch, former Lord Mayor of London and former Felstedian. Other events throughout the year included an OF Anniversary Dinner at Middle Temple Hall, a CCF & Corps of Drums Reunion Dinner and a Family Day which saw the whole school and local village community come together to celebrate the 450 year legacy, an anniversary Cricket match, and a celebratory 450th Winter Ball. Felsted enjoyed its crowning moment of the celebratory year when Her Majesty The Queen and HRH The Duke of Edinburgh visited the School in the May of that year. Following in the footsteps of Her Majesty The Queen Mother, who visited for the 400th anniversary, it was an extremely special occasion. During an extraordinary day Her Majesty unveiled two plaques commemorating the 450th anniversary and also the rebuilding of Follyfield House. The plaque unveiling was followed by the presentation of a number of gifts, including a boot scraper made by Felsted pupils and staff.

In 2015 and after seven very successful years at the helm, Dr Mike Walker retired as Headmaster of Felsted School. Mr Chris Townsend, who was Dr Walker’s deputy for five years, was appointed as Headmaster as of 1st September 2015. In 2017, Felsted was shortlisted in no fewer than 5 TES Independent School Awards, more than any other independent school across the globe. The shortlisted categories were as follows: Boarding School of the Year, Creativity in the Curriculum, Best use of Technology, Best Community Initiative and Best Marketing Campaign.

In 2019 Felsted was inspected by the Independent Schools Inspectorate and found to be compliant in all areas and ‘excellent’ in both judgements of Educational Quality (the top grading), a tribute to the hard work of all the staff, pupils, governors, and of course parents, in supporting the school's vision to provide the very best all round education, and develop young people of character, who will make a difference in the world around them.

In 2020 Felsted was Shortlisted for the TES Boarding School of the Year and in 2021 claimed the TES Marketing Campaign of the Year award.